Anatomy of a Scandal Season 2 Expected Release Date, Cast, Plot, and Everything You Need to Know

On 15 April 2022, Netflix premiered, Anatomy of a Scandal, yet another psychological thriller series to its subscribers. As the sixth episode of this viral series ended, another chapter was opened. It got everyone wondering when we will get Anatomy of a Scandal Season 2?

Based on the novel of the same name by Sarah Vaughan, the series centers on a scandalous court case involving James Whitehouse (played by Rupert Friend), a high-profile politician. James’s political and personal life- a happily married man with two children, is thrown upside down when his affair with an aide, Olivia Lytton (played by Naomi Scott), is revealed.

The situation soon worsens for James when Olivia goes to the police to accuse him of rape. The show is filled with unexpected twists and turns that keep the spectators engaged till the end.

Here’s everything we know about the Anatomy of a Scandal’s future.

There are two pieces of news for the audience regarding season 2. First and foremost, the show was introduced as a limited series- which usually means one and done. But in contrast, it is labeled as an anthology series too, which means each season focuses on a different scandal. 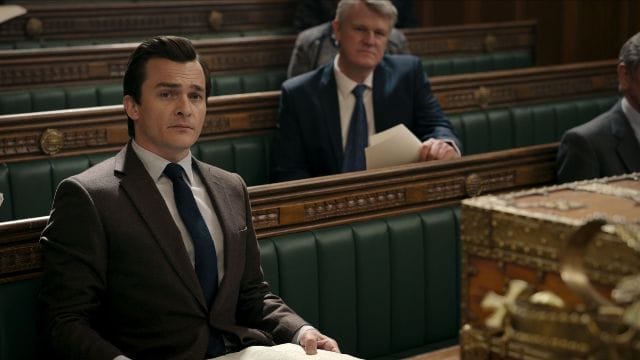 As of this writing, Netflix has not renewed the show; the show must be a huge hit to get a second season on Netflix. Therefore, assuming the show lives up to the network’s expectations and is renewed within the coming few months, viewers can anticipate ‘Anatomy of Scandal season 2 to premiere in 2023.

Anatomy of a Scandal Season 2: The Expected Cast

If the show returns for a second season as an anthology series, then it’s pretty likely that an entirely new cast will be bought on board for a brand-new story. The concluding episode of the show completed the entire plot, except for one character, Kate Woodcroft (played by Michelle Dockery), whose story didn’t quite get its closure.

As season 1 ends with Kate, suited up for a new trial staring at the camera, there are high chances that she might also return for the next season.

But more details will follow, only when a season 2 is officially confirmed.

Anatomy of a Scandal Season 2: The Expected Plot

As mentioned above, Anatomy of a Scandal was always meant to be a one-and-done show in that it will only have one season to conclude the entire series. But there is a catch here. While the original show is not meant to return for one season, the good news is that there is still a chance for the series to return in an anthology.

The first season focuses on rape accusations by a political aide who was having an affair with a high-flying MP. The end of the season established the charge to be accurate, with James’s wife, Sophie Whitehouse, leaving him after she discovers that, despite his not guilty conviction in court, he had a history of sexual assault.

READ MORE: Snowfall Season 5 Episodes: How Many Episodes Does Season 5 Have?

Sophie also leaked a story about the Prime Minister and his previous scandals. It was also revealed that James was one of those who covered up what the PM did in the past.

Whether season 2 will focus on the scandal that Sophie leaked at the end of the series or what the second season will delve into cannot be speculated as of now, as the show’s future is literally up to the writers.

Anatomy of a Scandal Season 2: is There a Trailer Yet?

The first season of Anatomy of a Scandal has just launched, so we have to wait a while before we get our hands on something new.

READ MORE: Doom Patrol Season 4: What Are the Speculations We Have About the Plot?

But we promise to keep you updated as soon as we get to know you further. In the meantime, continue binge-watching and enjoying the show!

Where Can I Find Anatomy of a Scandal to Watch?

The show is on Netflix, where you can watch all 6 episodes. About 45 to 50 minutes is how long each episode lasts.

If You Liked Anatomy of a Scandal, You Should Also Check Out These

Limited series are a must-stretch on Netflix because they are short and only have a certain number of episodes so that you won’t be waiting with bated breath for the next season. So, the second season of Anatomy of a Scandal might never come out, but here are some other things you should try at least once.

Annika Season 2: Is Another Series of Nicola Walker Drama on the Cards?

Jimmy Iovine Net Worth: How Much Fortune Does He Have?

He-man and the Masters of the Universe: When It Will Be Renewed?