Married at First Sight Season 13: Everything That You Want to Know About the Show!

Married at First Sight still tries to match couples based on their personalities to see if they can find things they have in common once they are married. Soon, season 14 will be over, and the real question is whether or not the couples will stay together. If they decide to stay together after the show, people will wonder if they can stay together.

Season 13 has been over for more than a half year, so the couples on the show have had time to see if they are a match made in heaven. All the people in the five pairs are from the Houston area, but the length of their relationships has been all over the place. When people look at them, they might be able to guess where the season 14 couples could go in the finale and maybe even after that.

The groundbreaking show Married at First Sight has led to 14 couples who are still happily married and nine children. Now that the hit series has won the Critic’s Choice Award, it is starting its 15th season, which begins on July 6 with a three-hour episode on Lifetime.

READ MORE: Seal Team Season 6: When Will It Be Renewed?

This shows that it is possible to find true love at first sight.

This is the first time the show has ever been on the sunny West Coast. Singles from San Diego, California, will meet their matches for a brand-new season sure to be entertaining, surprising, and full of romance.

A post shared by Married At First Sight (@mafslifetime)

The relationship between Michaela and Zack got off to a bad start, and it seemed like they could never get back on track. Because Zack got COVID-19, they couldn’t go on their honeymoon, which is where the couples on the show get to know each other better for the first time.

Michaela wanted to stay married on the day of the decision, but Zach had other ideas, so the two broke up. They didn’t seem to like each other since they wouldn’t talk or stand next to each other on stage at the show’s annual reunion. Zach and Michaela’s marriage seems to have been over before it even began, and they are no longer together.

Fans of the show shouldn’t be surprised by this since Bao, and Johnny’s relationship didn’t even last until the end of the season. During the season finale, Bao asked Johnny for a divorce in a polite way, ending their relationship.

Since they knew each other a little from college, these two seemed to have the most potential. Johnny did make mistakes in the marriage, like talking badly about Bao to one of her friends behind her back. Fans were not happy with this behavior, and the two became a couple of fans they did not like.

READ MORE: Attack on Titan Season 4 Part 2: When It Will Be Released?

Even so, when they saw each other again, they were friendly and hoped for the best. This proved that they did not get back together and were no longer together.

Gil and Myrla were the only couples on this season’s show to agree to stay together at the end of the season. They moved in together, which was a good sign that their relationship might be real. Even though they first fought a lot, they eventually said they loved each other. 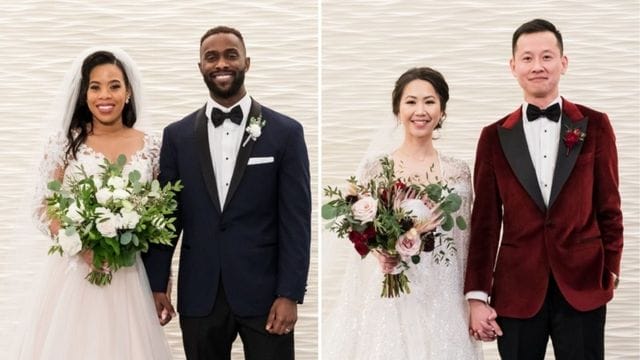 They both got terrible news at the reunion, which was a shame. Myrla said, “He’s an amazing person, handsome, and everything else, but we’re just not for each other.” The two went on to say that they didn’t feel an emotional connection at first, and even though they did later, they both felt it was a bit forced and not worth it in the long run. The two are still not together and have never been.

Anyone who watched the show should not be surprised by this one because Brett and Ryan were never a good match. Ryan was caught using dating apps while they were still getting to know each other. This made it hard for them to trust each other again. They decided to break up on decision day, so they didn’t even make it to the end of the season as a married couple.

Even though they had done some questionable things, they said at the season’s cast reunion that they were on good terms and thought of each other as friends. They seemed happy with how things were between them, but Ryan said he was sorry they hadn’t had “the hard conversations” that were needed. Even though they are friendly, they are not together right now.

Four other couples had already broken up by the end of season 13, so these two would be the only ones left. As of December 2021, they were still legally married, giving fans hope that at least one couple would last. But, in a statement to People, they said they were getting a divorce.

READ MORE: Spy X Family Season 2: When Will It Be Renewed?

Rachel said in the reunion episode that she and Jose broke up for a short time after the show ended, but then Jose returned to her, and they tried again and were successful for a while. Sadly, this didn’t last long, and the couple is no longer together.

Who From Season 13 of Married at First Sight is Still Together?

On Decision Day, they all agreed that they wanted to stay together, but the reunion showed that they broke up for a short time after the cameras stopped rolling. Jose and Rachel are still married and working on making their marriage work.

Are Married at First Sight Season 13’s Jose and Rachel Still Together?

Myrla and Gil, Do They Still Go Out?

Even though they decided not to break up on Decision Day, they were together for less than two weeks after the cameras stopped rolling. “I was caught off guard by how everything went down,” Gil told the experts at November 2021 Married at First Sight reunion. They said that making the decision was not easy but that in the end, “this decision is best for our future.”

Ice in My Veins: What Does Mean of This Trend?

Jimmie Johnson Net Worth: How Much Money Does He Makes?

Tracy Morgan Net Worth: What Was His Favorite Quotes?

Jhene Aiko Net Worth: How She Start Her Music Career?