“Silverton Siege” dramatizes the events that occurred on January 25 in 1980, when one bank was taken hostage by rebels, fueling a campaign that would ultimately to Nelson Mandela’s release from jail.

An anti-apartheid protest gone bad leads three teenage freedom fighters to hide out in a neighboring bank in 1980, where they hold the customer’s hostage as a form of security. The film takes place in Silverton. Despite the police’s efforts to encircle the bank, the three remain imprisoned and demand that Nelson Mandela be freed in exchange for the release of the hostages.

Mandela’s battle for equality and efforts to dismantle the racist apartheid government put the revolutionary in prison; at this point, he has served 18 years of his life imprisoned. Insisting on his immediate release, the Silverton trio held the firm notion that they could not be free until all of their people were free.

In their ignorance, they had no idea that their actions would spark a worldwide movement. As all hostage rescue situations guarantee, sentiments run high on both sides, and judging from the trailer, the outcome is an epic, high-octane drama. 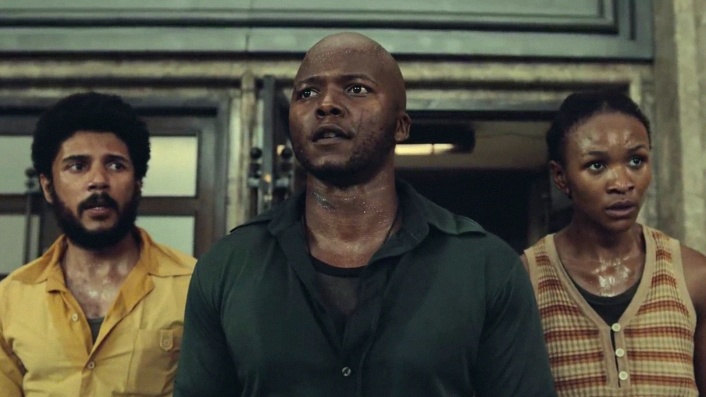 Watch the Trailer for Silverton Siege

Mandla Dube, the South African director, writer, and award-winning cinematographer behind “Jiva!” on Netflix and “Kalushi: The Story of Solomon Mahlangu,” a film from 2016, directs “Silverton Siege.” Of his upcoming release, Dube said (via Variety):

“To decolonize the story of who we are, filmmakers from Africa must be given more opportunity. ‘Silverton Siege’ is my best work to date. Additionally, I believe that the Silverton Siege trio can serve as an inspiration to today’s youngsters, letting them know that they, too, have the potential to affect change and that their voices matter.”

A trio of Umkhonto weSizwe (MK) liberation fighters realizes they have been set up while on a high-profile operation to sabotage a petrol station, with police ready and expecting to arrest them. After a bloody and dangerous chase, they seek refuge in a bank.

The Trio is all in the opinion that someone, maybe one of them, is an “Impimpi” – a sell-out and police spy. Who is it that we’re talking about here? Pressure grows and pressure rises among them in the bank. All individuals involved have a thing in common — a fight for freedom.

Seeing that they have no choice except to bargain for Nelson Mandela’s release, the Trio decides that prison or death is the only alternative left to them.