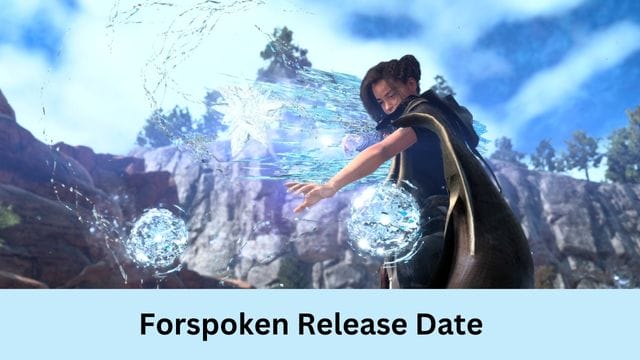 Forspoken Release Date: Comparing the Latest Final Fantasy 7 to Intergrade, How Similar is It?

Forspoken is a new role-playing game (RPG) from Square Enix with fantastical action and adventure elements. This article contains all the information you’ll need about the upcoming open-world game, including the release date and trailers.

Forspoken, originally known as Project Athia and announced before the PlayStation 5’s release, boasts visually stunning and mechanically intriguing gameplay, but its final form is still a mystery.

The game, created by Square Enix’s Luminous Productions, follows the adventures of a woman named Frey as she travels from New York to a vast parallel world. While there, she undergoes a transformation that grants her superpowers and finds herself drawn into a conflict between the natives of this world and mighty beings known as “Tantas.”

It appears that Forspoken is an open-world action RPG with a novel and fluid movement system. We’ve compiled everything we know about it so far.

While the full details of Forspoken’s past remain unclear, I will share what I have learned. Frey, a young girl from New York who was magically transported to the land of Athia, is the protagonist (hence, the original name of the game). She gains her own magical abilities as a result (there are more than a hundred spells to learn, which is totally awesome). The similarities to Skyrim are uncanny.

Most people in Athia are outright hostile, and the few who aren’t (like villagers) are subject to Matriarchs, powerful mages who will likely make your life a living hell. All the while, you’re trying to get back home, but that’s impossible unless you save the world. Routine stuff for a hero.

Based on the trailers released over the past few months, we know that the world of Forspoken will consist of grasslands, a desert region, and a smattering of villages. The stark contrast of grassland and desert is very appealing to me. Akin to opposite sides of the same coin.

Forspoken is set in a fantastical world where dragons, kings, and magic are all possible. The vast majority of the environments seen in the videos are designed to facilitate fast movement and free parkour. Frey has also fought stone giants, wolves, bears, and a mysterious throne room boss.

As I’ve been dissecting the game’s trailer, I’ve noticed that all the buildings are overgrown and some of them are even in ruins. Only two of the main characters—one of whom is Frey—ever appear outside of a building. Maybe the world of Forspoken is a post-apocalyptic wasteland where monsters and war have ravaged once-thriving cities.

Speculation amongst fans has it that Forspoken is the next logical step after Agni’s Philosophy, a Final Fantasy tech demo that was shown off in 2012 to hint at the franchise’s potential future. Given that Luminous provided the demo, it’s not surprising to find some refinement of these concepts in Forspoken’s design.

Forspoken’s goal is to equip the player with powerful magic abilities and the freedom to traverse the world by hopping from place to place. Square Enix calls the game a “narratively-driven adventure,” and director Takeshi Aramaki claims the game has fluid movement.

The most recent trailer for Forspoken gave viewers a better idea of the plot, but there are still a few gameplay sequences to dissect. As the dragon slashes at her, our heroine Frey Holland runs frantically around the arena.

She can also ensnare two flying monsters in a water orb, set magically imbued explosive traps, call forth a flame sword to whack foes, turn foes to ice, effortlessly leap between the rooftops, conjure shaky platforms underneath her to temporarily elevate herself, and even pull herself onto a tether to clear a gap. Like a machine gun, she can fire magical projectiles from her palm.

Final Fantasy XV was Luminous Production’s first foray into creating an open world narrative-driven video game. However, the team’s interesting primary quests were hampered by a world that was both vast and devoid of content, with side quests that were both repetitive and uninteresting. This was especially problematic because the player was unable to freely move around the vast environment. The Regalia (the game’s signature vehicle) stood out from the crowd, but driving it served more as a window onto the world than as a means of traversal.

However, a world the size of Final Fantasy XV’s would be ideal for Forspoken. Given that Frey can effortlessly leap between rocks and over chasms in Forspoken, these expansive environments need not be intimidating.

It could be significant to highlight a sense of emptiness in the environment. If Forspoken is stuffed full of cities, characters, and quests, players will have to stop their parkour runs frequently to engage with them. Luminous Productions can keep its environments open with significant distance between landmarks to encourage constant movement because climbing and sprinting at breakneck speeds makes exploration more satisfying.

At The Game Awards in 2021, a brand-new trailer for Forspoken was unveiled. We found out that May 24 is the official launch date for the game. It appears Frey has been outcasted by the powers that rule the fantasy world, as many plot points were revealed in the trailer. One of the trailer’s most interesting parts is when a dragon-like creature fashioned out of tree roots fires a beam of blue fire at Frey. Looking forward to doing battle with it.

During March’s Sony State of Play, a new trailer for Forspoken was released, showcasing a fight against a massive dragon, many of the incredible powers available to the player, and many shots of the game’s expansive landscapes.

A few days ago, a long 4K gameplay trailer was released, showcasing some of the incredible tricks the player can pull off with the game. I’m very curious to find out how it feels to combine parkour with supreme magical power.

Bear McCreary and Garry Schyman wrote the music for Forspoken. Fortunately, God of War: Ragnarok will feature the return of composer Bear McCreary, who earned widespread acclaim for his outstanding work on 2018’s God of War. The Walking Dead, Battlestar Galactica, Agents of S.H.I.E.L.D., Outlander, Godzilla: King of the Monsters, 10 Cloverfield Lane, and many more all feature McCreary’s work.

Schyman has written scores for a wide variety of video games, including the Bioshock series, Guild Wars 2, both Middle Earth: Shadow games, and many more. I’m looking forward to hearing how his music improves Forspoken, especially in light of how intense, atmospheric, and emotional the Bioshock soundtrack can get.

The president of Square Enix, Yosuke Matsuda, has confirmed that ray-tracing technology will be used in Forspoken. According to Gematsu’s translation, Matusda says, “PS5 dramatically improves video technology, such as with the implementation of light-reflecting ‘ray-tracing’ technology.” The experience is virtually identical to that of the PC version. Through the application of these unique qualities, we are able to produce extremely precise visuals.

A Performance and Fidelity mode, with the latter setting the game to 30fps in order to achieve a 4K resolution and implement ray-tracing technology, seems likely, given how other PS5 games handle ray-tracing. To give players more control over their experience, Ratchet & Clank: Rift Apart featured Fidelity, Performance, and Performance Ray-tracing modes. Forspoken, if it can, should also adopt such a system.

Release of Forspoken has been pushed back to January 24, 2023. The new release date was announced on social media by developer Luminous Productions, who said, “all game elements are now complete,” but that the team was moving into “the final polishing phases” of the project.

Forspoken has been pushed back again; the original release date of May 24, 2022 has been moved to October 11, 2022. Fans of the project will be relieved to hear that the delay until early 2023 is due to additional polish.

Read More – Vegas X: What Are the Features of the Vegas-X Slot Game App?

Which Services Will Forspoken Be Available on?

The game will be available for the PC and will be a limited-time PlayStation 5 exclusive.

Since this exclusivity is planned to last for at least two years, Xbox players (and Nintendo Switch owners) may be in for a long wait (if the game ever makes it to their respective consoles).

Would You Classify Forspoken as a Final Fantasy Title?

Luminous Productions is hard at work on their upcoming open world fantasy game Forspoken. The studio was founded by ex-Final Fantasy 15 programmers, and it’s easy to see the influence that game had on their work on this project.

Does Forspoken Use the Third-person Point of View?

I’ll list a few of the most noticeable variations. Frey can perform a wide range of magical feats in Forspoken. Her skills are essential for melee and third-person shooting attacks, but she also uses them to avoid danger and cover great distances quickly.

How Similar Are the New Final Fantasy 7 and Intergrade?

Sons of the Forest Release Date: How Much Does It Cost?