Tesla Cybertruck, once it hits the market, will likely stand out as one of the most unusual cars on the road for at least a few decades. The release date of the all-electric pickup truck has been pushed back twice, and it is still unclear when it will finally be available.

While Elon Musk’s pet project may have the aesthetic of something made by a PlayStation 1 game designer with a bias against curves, it still appears to have all the features that make a Tesla a Tesla. All the cutting-edge conveniences you could want in a minimal package, with some of the best available range (within reason). Everything you need in the form factor of a pickup truck, complete with all the standard equipment for the class.

As a result, this electric vehicle may be one to keep an eye on, regardless of how it looks. The Tesla Cybertruck is both strange and fascinating; here’s everything you need to know about it.

Leaked photos of (possibly) the final Cybertruck before it goes into production can be found on the website of the Cybertruck Owners’ Club.

The radical aesthetic of the first 2019 concept has been carried over almost unchanged, save for the addition of a windshield wiper and the adoption of a more straightforward alloy wheel design.

Musk tweeted, “Reviewed design with Franz [von Holzhausen, Tesla’s chief designer] last night” after he had previously hinted that the truck might be scaled down to fit on European roads. We can’t accept reductions of even 3%. Will roughly equal this measurement.

It’s difficult to tell if the Cybertruck’s footprint has been reduced or increased from the concept in these pictures, but it appears to be about the same in general shape (pictured throughout).Is Cybertruck’s price guaranteed?

Tesla claims that its Cybertruck, which is powered by three motors, can travel 500 miles on a single charge. The entry-level rear-drive Cybertruck can only travel 250 miles before needing a recharge, while the mid-range dual-motor model can travel 300 miles.

The original plan called for the top-tier Cybertruck to feature not two, but three electric motors. Elon Musk hinted in December 2021 that he was working on a new four-motor Tesla Cybertruck with a “Crab Walk” feature similar to the Hummer EV.

When driving off-road, the Hummer EV can use its four-wheel steering to move diagonally (like a crab) to avoid large rocks and boulders.

Musk added that the truck would be able to spin on the spot because Tesla’s system would function ‘not just like a tank,’ in which the left and right wheels turn in opposite directions. This seems to be a subtle dig at rival electric vehicle manufacturer Rivian, which includes this capability in its R1T pickup truck.

If you’ve already placed an order for a single, dual, or triple-motor Cybertruck, Musk says you may be able to upgrade to this new quad-motor model.

Read up on the best 4x4s currently on the market.
However, once production of Cybertrucks starts, it is unclear whether all these variants will still be available. After all, shortly after Plaid production began, Elon Musk famously announced, “Plaid+ is cancelled,” cancelling all orders for the Plaid+ model. That’s unnecessary because Plaid is fantastic.

Accelerating from 0 to 60 mph in under three seconds is a promise Tesla has made with their all-wheel-drive, three-motor Cybertruck.

The same 0-60 mph sprint can be accomplished in under 4.5 seconds by a dual-motor all-wheel-drive model, while it will take a full 6.5 seconds for a rear-wheel drive, single-motor model.

Read More – Zoobean Net Worth: 2022| When Did Zoobean’s Success Continue after “Shark Tank?”

Initial plans called for Tesla to start manufacturing the Cybertruck in late 2021, but the company pushed that date back to sometime in late 2022. There had been speculation that the release of the Cybertruck would be delayed again, but Elon Musk has now stated that no Tesla vehicles will be introduced in 2022. That means we won’t see the Cybertruck until at least 2023.

At first, the holdups were blamed on supply chain problems that have been affecting the auto industry at large. Elon Musk claimed that Tesla couldn’t produce 4,680 battery cells necessary for the Cybertruck, and a new casting machine would be needed to create the steel frame. 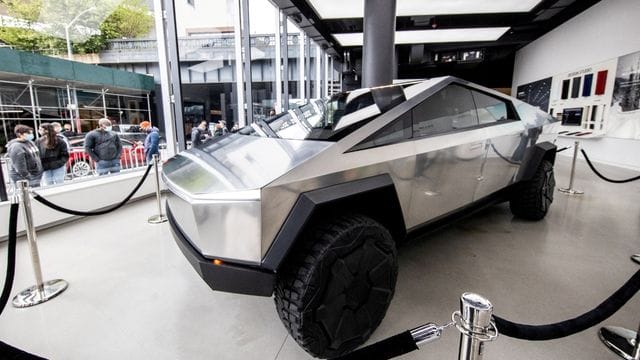 According to Elon Musk, Tesla plans to start mass producing its Cybertrucks in 2023 after having finished developing the vehicles by the end of 2022. Later, in July 2022, he confirmed the Cybertruck was on track to be in production by mid-2023, confirming his earlier announcement that the truck would arrive in 2023. It’s possible that the first Cybertrucks will hit the streets shortly after that, barring any unexpected delays.

However, Reuters reports that mass production won’t start until later this year, so don’t hold your breath. So it will be a while before Tesla can make a dent in the truck’s three-year-plus waiting list.

Unfortunately, we still have no idea when the Cybertruck will actually arrive, nor how the delays (and the announcement of a new quad-motor model) will affect the timetable for the production of the dual- and single-motor variants.

Musk unveiled Cybertruck in 2019 by breaking its supposedly indestructible “armour glass” windows. Since then, the company has pushed back the anticipated start of production three times, first to late 2021, then to early 2022, and most recently to the middle of 2023.

Read More Soapsox Net Worth: What Came next after “Shark Tank” In 2022?

The Cybertruck’s interior design is as sharp and angular as the rest of the vehicle. The geometric design continues with the seats, which are complemented by a dashboard that looks like it was swiped from a Roman villa and covered in marble.

The Cybertruck’s yoke-shaped steering wheel and massive 17-inch touchscreen are more familiar, as they are also available on the newest Tesla Model S Plaid and Model X Plaid.

2.830 litres is the amount of space Tesla says the Cyber truck can lock up. These include the frunk, the load bed (which Tesla calls the vault), and the space behind the side windows.

The Cybertruck can serve as a sort of mobile mini power station thanks to its built-in 120-volt and 240-volt power points. A built-in air compressor is included as well.

Specifications and prices for the Tesla Cybertruck were removed from the company’s website just recently. What Tesla originally said the truck would cost is no longer valid.

Musk announced the price increase during Tesla’s 2022 Annual Shareholders Meeting. Musk said, “Cybertruck pricing, it was unveiled in 2019, and the reservation was $99.” Since then, he said, “a lot has changed, so the specs and the pricing will be different. I hate to give sort of a little bit of bad news. But I think there’s no way to sort of anticipate the inflation that we’ve seen and the various issues,”

We don’t know how much the truck will cost, but its starting price of $39,990 seemed too good to be true, and we know that the price of every other Tesla model has increased over time.

Standard equipment on all four variants will be Basic Autopilot, with the Full Self Driving package costing an extra $15,000. The Cybertruck is also likely to be eligible for the $199 monthly FSD subscription.

Tesla did bring back Enhanced Autopilot, which shares many of the same features as FSD for a much lower $6,000 price tag, and Full Self Driving Autopilot has already increased in price by $3,000 since July 2019. Elon Musk has said as much(opens in new tab) on multiple occasions.

While Enhanced seems to be set in stone for the time being, FSD is meant to be a service that constantly improves (especially if you’re a beta tester).

The Cybertruck was also expected to be released in the United Kingdom, but its price and exact release date are still a mystery. According to Musk, the truck is currently being built to U.S. specifications because adapting it to the needs of every country would be impossible.

With the exception of Cybertruck reservations, which lock in the price of Full Self-Driving at the time of deposit, Tesla does not necessarily guarantee pricing on pre-orders.

How Many People Are Currently Waiting to Use Cybertruck?

The Tesla Cybertruck, the company’s newest offering, won’t go into production for at least another year, the company recently confirmed. Two years in, and it could be much longer before all 1.3 million reservations are filled, is how long people have been waiting.

Have Many Orders Been Placed for Tesla Cybertrucks?

In May of 2021, the Cybertruck forum tallied over 28,000 user entries in a crowdsourced reservation system and concluded that over a million Cybertrucks were on order. There has been a steady increase over the past year, and it is now thought that there are close to 1.5 million reservations.

In What Ways is the Cybertruck Behind?

2023 Prius Release Date: Which Prius is the Most Luxurious?

Cross-Platform App Development Companies – How They are Disrupting Web…